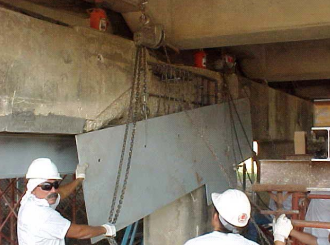 Owner: City of Fort Worth

During an inspection of bridges in Fort Worth, Engineers discovered that Bent #17 of the 7th Street Bridge had serious rebar corrosion as well as concrete delamination around the rebars. The deterioration had caused the bearing pad to slip below its original elevation and no longer give support to the bridge girder. Mobile Enterprises, Inc. was chosen to make the emergency repairs.

The repair involved jacking the girder up off of the bearing pad to facilitate removal and replacement of the bearing pad. All loose and deteriorated concrete was chipped away and the exposed rebar was sandblasted clean. The blasted rebar and exposed concrete was primed with Emaco P-24 bonding agent. Three-quarter inch plate was bolted to the face of the bent to add strength and act as a form for the Emaco S-66 structural repair mortar that was pumped to fill the voids. Additional areas of corrosion were discovered on another bent and repaired in a similar manner in the time allotted. 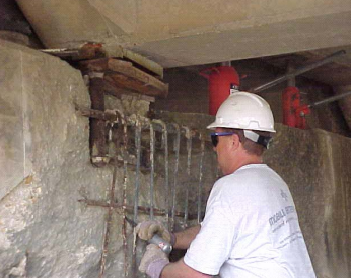