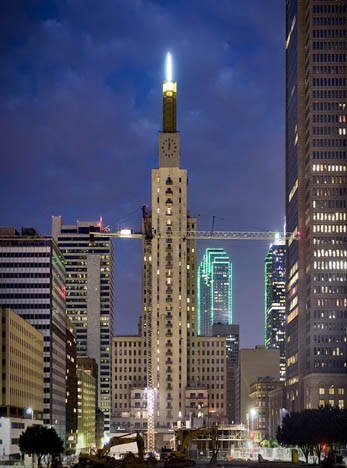 Destined to be a showplace of the Southwest when it opened in 1943, the venerable 31-story Mercantile National Bank building was the tallest skyscraper west of the Mississippi and the only big office tower built in Dallas during World War II. The original architects were Donald S. Nelson and Walter W. Ahlschlager, who also designed New York’s Roxy Theatre.

After the building sat vacant for nearly 15 years, Cleveland-based developer Forest City Enterprises bought the building in 2005 and invested upwards of $145 million to convert the clock tower building into 213 rentable apartments at Main and Ervay Streets. The City of Dallas provided about $58 million in financial incentives.